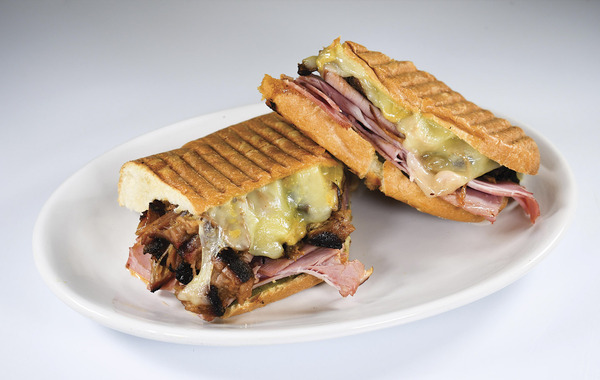 It’s no secret that our region is full of expert sandwich makers, folks who understand that everything from the quality of the bread to ingredients used inside are of the utmost importance when constructing a memorable handheld. And so now that it’s been a few years since our last expedition to find the best sandwiches in the area, we decided it was a fine time to once again to reveal some of our current favorites. You won’t find any cheesesteaks here (we’ve given those their own spotlight already), but what you will find is a great mix of cold and hot sandwiches that show culinary creativity comes in many forms.

The star of the show is the corned beef made in-house and sliced just thick enough for you to be able to savor every morsel of the tender, well-seasoned brisket. It’s piled with sauerkraut, Swiss cheese and Russian dressing into a hearty toasted and buttered marble rye.

WAKE UP at Nene’s Market in Marlton

We didn’t really anticipate including any breakfast sandwiches in this spotlight, but who wouldn’t set their alarm early for eggs, home fries, melty provolone and chef Mark Berenato’s vaunted braised beef short ribs hugging it out inside a long roll? Talk about a “wake-up” call.

GF GRINDER at Good Foods to Go in Mount Laurel

Chicken tenders—both delicious and homemade, we might add—are covered with this eatery’s signature honey mustard sauce, mixed with bacon and then baked in the oven with muenster cheese on a hoagie roll for a gooey, chewy, crunchy delight.

TRIPLE B at Cluckwerks in Haddonfield

Slung out the side of Haddonfield fine-dining spot Wanda, the 3 B’s represented here consist of bacon, Brussels sprouts and balsamic glaze, all of which are combined with your choice of grilled or fried chicken and finished with parmesan.

Rotisserie beef is shaved ruler’s edge thin and stacked with silky caramelized onions and gruyere before being placed between two slices of focaccia—courtesy of Philadelphia’s Merzbacher’s bakery—that’s been smeared with an artisanal cabernet roasted garlic butter.

Those who know, know that some of the best hoagies this side of Philly come out of Pal Joey’s unassuming strip mall location. That includes this tantalizing medley of thinly sliced fried eggplant with a biting sharp provolone and roasted red peppers on a seedy Sarcone’s loaf.

You don’t have to be a vegetarian or participate in “meatless Monday” to appreciate this wonderful blend of sautéed spinach, mushrooms, tomatoes, onions and bell peppers. It’s a standout sandwich at a place that has a menu full of them.

FIG AND PROSCUITTO at Tucci’s Mini Hoagies in Voorhees

Forget the big belly-busting sandwiches you may find elsewhere; this joint specializes in smaller handhelds that do more than hold their own. We love this offering with salty prosciutto and peppery arugula enhanced with a fig spread and balsamic glaze.

A taste of New Orleans in New Jersey, this twist on the Bayou’s staple sandwich is made up of panko fried shrimp lined into an Italian roll with lettuce, tomato, onion, fire roasted red peppers and drizzled with a Thai-flavored remoulade.

For those who like to crank up the heat, this one’s for you. A fiery blend of capicola, Santa Fe turkey breast, pepper jack cheese and long hots are only slightly tamed with the additions of lettuce, tomato and splashes of vinegar and oil.

People often talk about Jake’s can’t-miss onion rings, and rightfully so. But this sandwich also deserves to be part of the conversation as a crispy fried veal cutlet is wrapped with prosciutto and outfitted with a winning combination of roasted peppers, garlicky spinach and provolone cheese.

CUBAN at 322 BBQ in Mullica Hill

There’s a lot to like at this offshoot location from barbecue masters David and Sons, especially their version of the classic Cuban sandwich. Succulent pulled pork melds with fresh slices of ham, Swiss cheese and pickles prior to being pressed to perfection on bread with mustard.

PIG AND PASTURE at Crumb in Haddonfield

The menu at this buzzed-about sandwicherie tucked just off Kings Highway changes frequently, but if we had a say this creation would stick around forever. Homemade bread sets the stage for familiar dance partners in shaved pork and broccoli rabe which are accompanied by provolone and a long hot aioli.

DEATH BY JEFF at Phil’s Deli in Cherry Hill

At some point, we are going to need to hear the backstory on how this sandwich was named, but for now we’ll settle for sinking our teeth into this combination of roast beef, American cheese, fried onions and Russian dressing stuffed between slices of rye bread and grilled.

It’s worth waiting alongside the Rowan University co-eds and knowledgeable foodies who flock to Peter and Sons for the chance to sample their latest creations. Here, garlic bread and vodka sauce elevate the standard chicken cutlet, but if you want to take things even further, add some mozzarella squares.

This one is a real mouthful with grilled chicken breast being robed by sautéed mushrooms, bacon, Monterey jack cheese and honey mustard, all inhabiting space between two pieces of sourdough bread, the tanginess of which adds further flavor.

The earthiness of the meaty portobello mushrooms and the spice of the blackened chicken are a match made in heaven. Added touches of sautéed spinach, roasted red peppers, fresh mozzarella and a house-made ciabatta further seal the deal.

Inspired by the classic dish, this sandwich certainly earns a “blue ribbon” from us for being extremely crave-worthy thanks to the trio of grilled chicken breast, ham and Swiss cheese with creamy blue cheese dressing for good measure.

PORK CUTLET at The Local in Mount Holly

This inviting gastropub is the perfect place to grab a pint of local craft beer and munch on this breaded and fried pork tenderloin topped with fresh mozzarella, marinara sauce, roasted red peppers and spinach.

Bacio translates to “kiss” in English and chef Robert Minniti definitely puts a chef’s kiss on every dish coming out of his kitchen. And that extends to the sandwich portion of his menu that contains this mouthwatering panini that showcases barbecued pulled pork along with smoked gouda.

THE GODFATHER at Bagliani’s in Hammonton

No trip to this favorite Italian marketplace is complete without a sandwich to go. We’re quite partial to this headliner of prosciutto, soppressata, dry-cured capicola, Bagliani’s own sharp provolone and marinated eggplant with lettuce, tomato and onion.

Parked inside a Del Buono’s hoagie roll, slightly spicy, slightly smoky hot capicola harmonizes with salami and milky fresh mozzarella, before being polished off with lettuce, tomato, onion and drizzles of balsamic vinegar.

Don’t let the seeming simplicity of this hoagie fool you, it’s very deserving of being exalted onto this list. A fresh loaf of Cacia’s stellar bread is the perfect vessel for roasted turkey breast, roast beef, American cheese and all the fixings.

STEVE AND VAL at Don Franco’s in Washington Township

Though we don’t know Steve or Val personally, we feel like we do after eating their eponymous offering so many times. Homemade meatballs are fried and nestled into a seeded roll with sharp provolone and long hots for a little extra punch.

FARMSTEAD at Bricco in Westmont

Already one of our must-visit spots for pizza in South Jersey, Bricco also wows the crowd with their thoughtful lineup of sandwiches. We suggest the Farmstead—organic roasted chicken layered with pancetta, avocado, arugula, tomatoes and rosemary aioli on fresh bread that’s been cooked inside the restaurant’s coal-fired oven.

CAPRESE at Arnie’s Gourmet Butcher and Culinaria in Cherry Hill

You may come to this butcher shop for the extensive selection of meats, but don’t overlook this enticing Italian specialty comprised of Roman tomatoes, mozzarella which is made on-site, arugula and a topnotch pesto dressing.

The homemade meatballs cooked up here come in a few different varieties, each delectable in their own right. But they are taken to a different level when topped with vodka sauce, sundried tomatoes, spinach and mozzarella, then slide into the oven and finished with olive oil and balsamic glaze.

Shore season has finally arrived, and if you’re like us, you can’t wait to head down the Parkway to your favorite exit, park the car and plant your toes in the sand. But before you embark on this annual rite of passage, allow us to offer some assistance.
- Bread Winners: The 50 Best Sandwiches in South Jersey

You could say that we are gluttons for punishment. How else would you explain our desire to spend the better part of a year traveling around eating hundreds and hundreds of sandwiches? We suffer for our readers, of course, all in an effort to bring you our choices for some of the most amazing things since, well, sliced bread.
- Best of the Best 2018

We must admit, every year around this time we get very excited about sharing our annual Best of the Best list with you. After spending the last 12 months eating, drinking, shopping and pampering ourselves, the time has finally arrived.