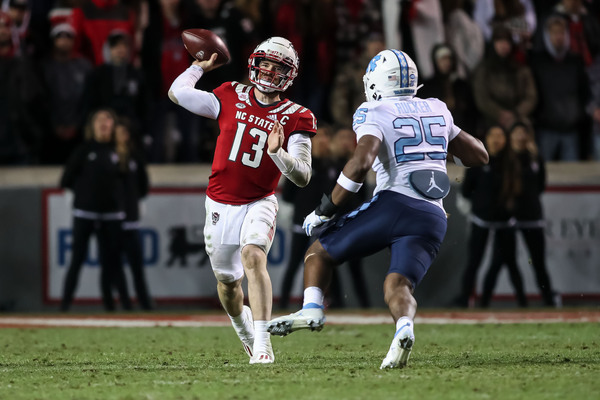 Devin Leary bounced back from injury to enjoy a truly impressive season at quarterback for North Carolina State.

A graduate of Timber Creek,, Leary has two more years of eligibility remaining. Last year his season came to an end after Leary suffered a broken left fibula in the fourth game, a 31-20 win over Duke.

This season Leary came back not only to regain the starting quarterback position, but he led the Wolfpack to a 9-3 season.

N.C. State earned a trip to the Holiday Bowl against UCLA in San Diego. The day of the game, UCLA announced that it could not play due to COVID issues.

So while that was disappointing for Leary and his N.C. State teammates, not to mention the fans who made the trip to San Diego, the season was an astounding success for the Wolfpack and Leary.

The 35 touchdown passes set a single-season school record. Former quarterback Philip Rivers had the old record with 34 in 2003.

There were so many big wins, but none more so than the 27-21 double overtime victory over perennial ACC and national power Clemson. It was the Wolfpack’s first win over Clemson since 2011.

After that win, the awards came flowing in for Leary.

He was named the Walter Camp FBS Offensive Player of the Week, the ACC Quarterback of the Week, and the Davey O’Brien National QB of the Week.

The final regular season win, a 34-30 home victory over North Carolina, was a vintage Leary performance.

Trailing 30-21, Leary connected with receiver Emeka Emezie for two touchdown passes of 64 and 24 yards in the final 1:35 to complete an improbable comeback.

For the game he completed 19 of 30 for 247 yards and four touchdowns. It also enabled North Carolina State to finish unbeaten at home for the first time since 1986

Leary has been able to accomplish this while playing for three difference offensive coordinators and three different quarterback coaches in his first three seasons.

This season he won North Carolina State’s Governor’s Award, which has gone to the team’s Most Valuable Player since 1960. He was also named the Wolfpack’s Torry Holt Award as the team’s most valuable offensive player.

In his three seasons, Leary has appeared in 24 games, with 20 starts.

It’s been quite a career so far for Leary, who has extended his dominance at Timber Creek into the Atlantic Coast Conference with N.C. State.

With the state ravaged by the COVID-19 pandemic, South Jersey is proving there’s more ways than one to put up a fight.
- Seizing the Moment

After the spring season was canceled last year due to the pandemic, these standout student-athletes from South Jersey are hoping to make the most of their opportunities in 2021.
- Their Time to Shine

These eight varsity athletes have been difference-makers on and off the field this fall.